Lifeguard Ken in the News
Check out this Asbury Park Press article and video clips. 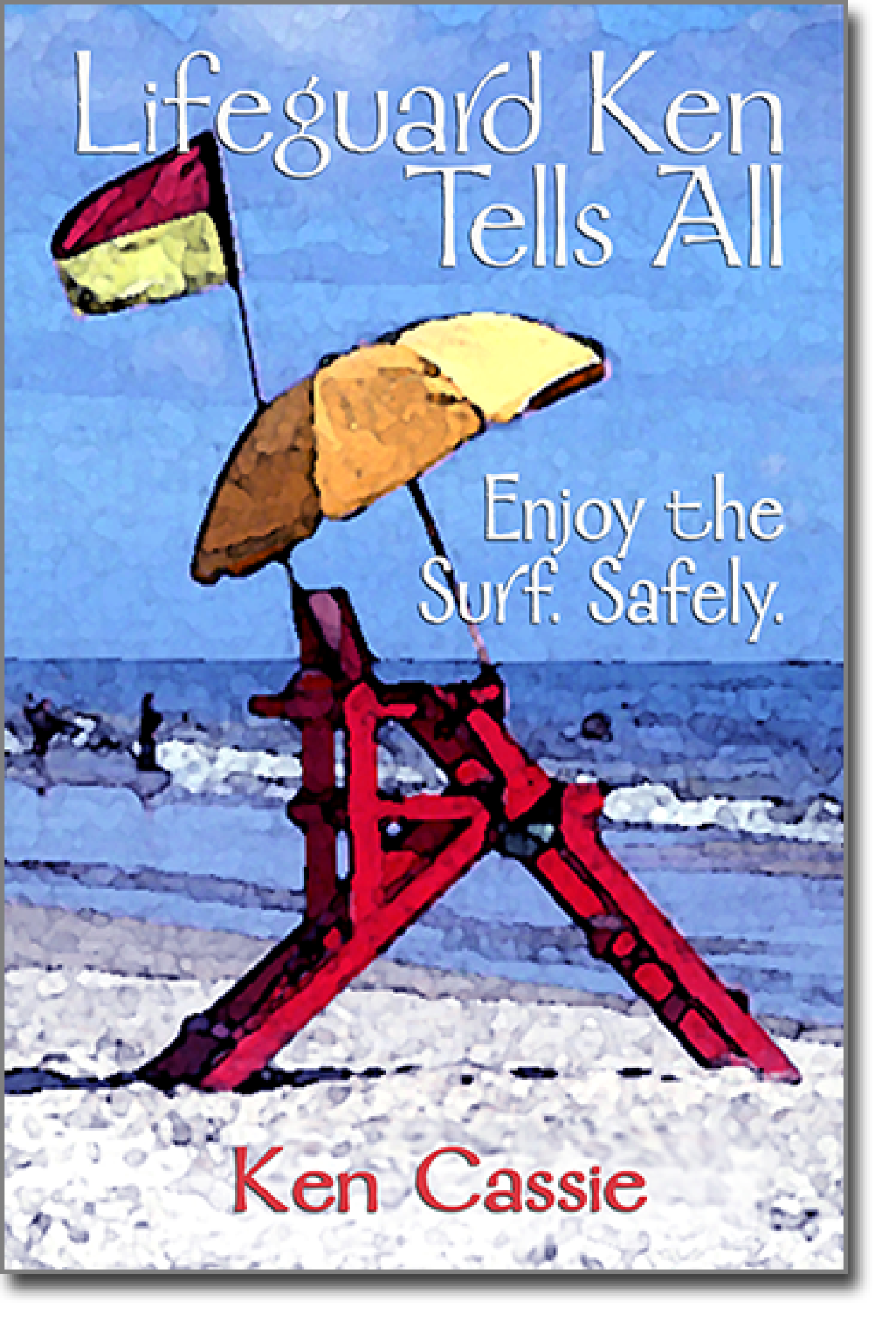 A big wave is coming! What can I do?

Will a rip current pull me out to sea?

What if I can’t get back to shore, or worse — a family member is going under?

Ken Cassie watched bathers from a Jersey Shore lifeguard stand for 26 summers and took part in 1,000 rescues. Using anecdotes and drawing upon personal experiences, Ken takes you through the tumbling surf with wry humor. But you’ll need your wits to survive “The Great Deceiver” when the calm, inviting water becomes a churning washtub — and you are the laundry.

Panic is your greatest enemy.

Discover simple skills to stay safe
in the surf — and have fun along the way
with Lifeguard Ken.

Excerpt from Chapter 1
A Lifeguard Drowns

A few years ago, while waiting for a connecting flight in the Cancún airport, a tourist returning home to the United States told me of an incident in which a young man on vacation entered the surf to rescue a young woman in distress. The young woman survived. The young man drowned. The tourist told me that the would-be rescuer had been a lifeguard back home.

I knew of this tragedy only through the tourist’s account. Having read no official report of it, I could not swear to accuracy in all details. Would-be citizen rescuers perish every year, but the thought of a lifeguard drowning on a rescue shocked me. How could this be possible?

After twenty-six summers as a lifeguard on the Atlantic seaboard, I could draw some assumptions, even from that sketchy summary. First, the drowning victim had probably been a competent swimmer. Second, he had Red Cross Lifeguard Certification. Third, he was probably in good health. Fourth, he had good intentions. Fifth, and most pertinent to his tragic death, the victim had been a lifeguard on still water, such as a lake or a pool. He had not been an ocean lifeguard.

You might question my fifth assumption. How can I possibly assert that the young man had not been an ocean lifeguard? Am I an elitist in assuming that ocean lifeguards are better than the rest? No. On the contrary, I consider non-ocean guarding more challenging.1 But an ocean lifeguard has training and knowledge specific to handling danger in the ocean where it touches the shore.

Armed with that training and knowledge, and with atypical variables aside, the odds are overwhelming that the ocean lifeguard will not drown. My claim rests on the likelihood that the young lady was struggling in an ocean current common to surf everywhere. The ocean lifeguard learns how to deal with this current. In Chapter Two, when we address rip currents, you may find my seemingly brash claim more plausible.

The young man drowned for three reasons. First, he did not know what caused the young lady’s distress. Second, he did not understand the ocean. Third, he died because he panicked.

The thought that a lifeguard can drown unsettles me. If this can happen, even to one unprepared for surf conditions, then how safe is the average bather, who boasts no special skills or certifications?

On my busy Atlantic Ocean beach, I watched countless bathers struggle in the surf. Most eventually reached shore without assistance. Many were unaware that the ocean had been hindering their progress. They blithely kept paddling. Maybe it was part of their fun. Others, aware of some resistance, kept plugging away and finally reached shore. They seemed to have little idea that a force had been working against them. Nor were they aware of danger before entering the water.

“It Can’t Happen to Me:” Meet The Great Deceiver

Have you or someone you know ever had trouble reaching the shore? Have you witnessed a rescue? No one dreams that this could happen to them. Few of us actually think we will have a fender bender today or catch the flu tomorrow. Forget statistics. Bad stuff happens to the other guy.

The ocean is not the flu or poison ivy. It is the good stuff. Or at least that is how it starts out. When it appears safe and inviting, it enhances our naïve sense of invulnerability. But when most of us enter the ocean, we simply cannot see the lurking danger.

Here is a brief scenario of what could happen to anyone who enters the surf. It is Saturday and a broiling midsummer morning. The temperature has already climbed above 90 degrees. You head for the beach. You need to forget a stressful week. Good things lie ahead today. How can you go wrong with sun, sand, and sea?

You walk across the warm sand. The ocean stretches dreamily to the horizon, glistening in the sun. You spread your blanket and race into the water. Like magic, worries wash away. In the ocean you are as carefree as a child.

You splash about for a while, then roll on your back and gaze into the azure sky. You happen to glance toward shore. Weren’t you about fifty feet from the beach? Now it seems that you are a hundred feet away. A moment ago the water was waist deep. Now it is up to your neck. Your toes are lightly bouncing off the bottom. In some recess of your mind a tiny alarm sounds. You swim a couple of strokes to reassure yourself. You try to stand. Now you cannot even touch bottom.

Fear surges through you with a numbing effect. Your mind becomes fixated on a single thought: I must get to shore. You swim with all your might. Exhaustion floods your body. You gulp salt water. It nauseates you. Terror chokes you. Signal for help? You cannot raise your leaden arms out of the water. You thrash and struggle. Your world has turned gray.

Fortunately, this story ends well. Having seen your plight, a lifeguard has swum to your aid. But suppose there was no lifeguard? Or suppose the lifeguard’s competence matched that of the poor fellow who drowned in Cancún? How would you have fared if survival lay in your hands alone?

____________________
1 Pools, lakes, and rivers provide a different set of challenges for lifeguards, compared to the ocean. First, the water offers less to key on, like a rip, shore break, or thundering surf. Second, bathers are less buoyant. Third, the physiology of drowning is more complex because fresh water in the lungs osmoses oxygen-bearing salt from the blood. Fourth, the lack of variable water conditions may weigh on the non-ocean lifeguard’s ability to maintain a high level of alertness. As an ocean lifeguard, I offer these thoughts with empathy and respect.

This is a terrific book — very informative but also entertainingly written — conversational, clear, and illustrated with delightful line drawings.... I intend to give it to my beach-going adult children. I think that anyone planning to spend time at the shore this summer should buy and read this important book.

I know Ken Cassie and he is the real deal when it comes to ocean swimming and safety. He has saved at least 1,000 people from drowning and is still in the ocean virtually every day from May until October — at over 80 years old! And the book is more than a "safety manual;" it is full of stories and insights (and pithy opinions) that make the book an enjoyable read — even if you never go near the ocean. A book by a true Jersey Shore waterman legend and philosopher.

Look for Lifeguard Ken at These Fine Stores

Lifeguard Ken Is Also Available at

Please use this form for media or publication inquiries.
Your message has been sent. Thanks for contacting Lifeguard Ken!